Earth Hour & Please Save My Earth

Just saw in Bangkok this poster of the annual event of Earth hour which reminded me of the classic sci-fi soap opera Please Save My Earth by Saki Hiwatari (1987). Tells the story of seven alien scientists reincarnated in planet Earth to save it from its destruction. Soon, the protagonist Alice Sakaguchi discovers through dreams her past life as Mokuren along with the other six reincarnated scientists. Enjoy the fan videos of the theme song “Memory of Time”.

Please Save My Earth “Memory of Time” 1

Please Save My Earth “Memory of Time” 2

Please Save My Earth Goodreads 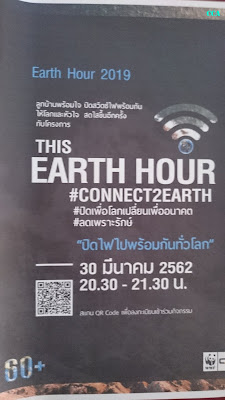 Enjoy my two favorite Thai animation movies and YouTube series. First, Krut (2018, Dir. Dir. Chaiporn Panichrutiwong) telling the story of the Garuda warrior Krut fighting a legion of giants in the Himmaphan forest. Second, 9 Satra, where the hero called Ott needs to save his people from a group of ogres that invade it! Finally, we have the Thai version of the classic Looney Tunes with Bloody Bunny transforming it into a gore horror comedy adventure.

PD: Enjoy this awesome Tachaya Keng’s song as the best magician of disguise and comedy!

From the many Japanese samurai stories, I wanted to share two of my favorite ones. Yamada: The Samurai of Ayothaya tells the story set in the 17th century of Yamada Nagamasa serving and fighting along with the Siamese in Ayutthaya Kingdom. Next, Rurouni Kenshin is a manga by Nobuhiro Watsuki telling the story of Himura Kenshin who in the past used to be an assassin called Hitokiri Battosai owned by the Bakumatsu government. When he decided to stop murdering, Himura Kenshin took refuge in a swordsmanship school which was owned by a young Japanese woman called Kamiya Kaoru.